“Lee did not surrender. Grant just stole his sword and Lee was too much of a gentleman to ask him to give it back.” (from the Complete How to Speak Southern by Steve Mitchell)

On Thursday, April 9th at 3:00 PM the bell at Appomattox Court House will ring in commemoration of the 150th anniversary of the end of the Civil War. At 3:15 PM bells in churches and court houses  will toll across the Commonwealth of Virginia and other parts of our land to recognize the importance of that event. In Middelburg the steeple bells in the historic Middleburg United Methodist and Emmanuel Episcopal Churches as well as the Unison Methodist Church in the village of Unison will ring for 4 minutes, one minute for each year of the Civil War. A war during which these churches served as hospitals for wounded from both sides.

Please note that I carefully do not describe this event as a commemoration of Lee’s surrender. To do so might result in my husband who DOES speak really good Southern (noticeable every time he introduces me as his wiiife) suggesting that I find another place to live. We are clear that we are not celebrating a surrender but the end of a bloody and lethal war.

The Battle of Middleburg, one of the first of the Gettysburg Campaign, left an enduring mark in the hearts and minds of area residents who experienced it. JEB Stuart tried to hold Mt. Defiance while the Union army invaded Middleburg and the surrounding area as part of an effort to ascertain Lee’s location . Sort of like a 19th century version of Where’s Waldo? One would think that a mass of soldiers the size of Lee’s Army of Northern Virginia would not be so difficult for the Yankees to locate but then they had not had much success locating John Mosby either.

My good friends who reside North of the Mason Dixon Line are always asking me why the South still seems to be fighting the Civil War. Well, it’s complicated.  A lot of animosity still festered during reconstruction. Parts of the South were left so devastated there was little left to reconstruct. While some Federal officials such as Lincoln and even his successor, Andrew Johnson, favored a post war gentle approach with the former rebels many others were determined to mete out as harsh a punishment as possible. It did not help that during the Civil War many ancestral homes in the South were burned to the ground or destroyed. Irreplaceable family heirlooms had vanished. Simple documents such as deeds, marriage and birth certificates had been recorded in courthouses which no longer existed.  There were many soldiers who were not from wealthy families or the landed gentry who returned home to find they no longer had one.  In many Southern families the expectation may have been to lose fathers, sons, and brothers in battle but not 200-300 years of family history. Southerners are proud people and proud of their heritage.  Naïve though it may appear to some today that is the reason some of the bitterness still exists and  still shapes the Southern point of view. Which to answer the question posed at the beginning of this paragraph is the only side I am presenting here.  I am very aware there is a converse ( with some merit) point of view so don’t be calling me and hollering about it at  3:00 AM. OK? 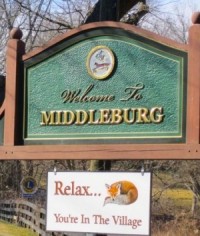 I have created this blog to help you get a feeling for what it is like to live in Middleburg, Virginia, the historic village, which is the capital of the Virginia hunt country.

There is a sign as you drive into town, which says, “Relax, you are in the village”. That says it all.

I will write some of these articles and some will be from other local bloggers or links to other sites.

Relax and enjoy the ride.